The Story Behind "Another Song"

"Another Song" is about the process of writing a song and where inspirations can come from anything and at any time! The idea for this song came one night where I was sick in bed with a cold and trying to sleep but I had a melodic idea in my head that kept me awake and I couldn't fall asleep. So, I finally pushed myself to get up out of bed for a bit and grabbed an acoustic guitar and started working out and playing the melody that was in my head and then came up with some lyrics. I ultimately decided that the song would actually reflect my late-night experience/ordeal. As the song came together over the coming days and I started thinking about arrangements and instrumentation, what really excited me was that it had a 60's flavor and very reminiscent of an early/classic Neil Diamond song (and one of my favorites) called "Cherry, Cherry." I wanted the acoustic guitar front and center, along with hand claps, congas, fast drum fills and a few prominent bass piano and organ riffs which really made the song upbeat, bouncy and fun. Add in the backing vocals and harmonies and it truly has that mid-sixties pop sound reminiscent of Neil Diamond, The Monkees and a number of other artists/groups from that period!!! ~AR

"The Feel Of Neil"

The power of music has had a profound effect on me ever since I can remember. I recall listening to some of the greatest bands and artists of the 60s and 70s growing up and being fascinated with all of the different sounds coming out of our stereo (if I recall, we had a Pioneer system with an old Marantz turntable). Back then, it was 33's, 45's, eight-tracks, and cassettes. I still remember going to the record store as child (places like Kemp Mill, Waxie Maxie's, Peaches, Sam Goody and Tower Records) and buying the newest release from one of my favorite bands or artists and paying only a few bucks. Wow, times have certainly changed!!

Of all the different music I was exposed to, the one individual that had the greatest impact and who shaped my musical tastes for years to come was Neil Leslie Diamond. I first discovered my love for Neil Diamond's music with albums like "I'm Glad You're Here with Me Tonight" and "12 Greatest Hits." I can still recall bopping along to "Dance of the Sabres" and "Desiree," and singing along with infectious tunes like "Sweet Caroline" and "Song, Song Blue." As the years went by and I reached my teenage years, I started getting into the latest musical trends of the 80s, including New Wave, Old School Rap, and Top 40 (I never missed Kasey Kasem's weekly countdown on the radio). But I always remained a Neil Diamond fan and casually kept tabs on his newest releases.

As music started changing in the late 80s/early 90s (including new rap and hip hop, as well as grunge/alternative), I decided to revisit some of that old music I grew up with, and that is when I truly discovered "The Feel Of Neil" in all its glory, and I finally decided to immerse myself in Neil's music once and for all. I remember one day as a teenager, my father handing me (as a gift) my very first Neil Diamond CD "Hot August Night II." I must have played that CD dozens of times, hearing all of those songs and beginning my journey to becoming a true Diamondhead. I even remember when I had the chicken pox and couldn't even get out of bed. I was listening to my Sony Walkman (remember those?) and the radio tuned to an oldies station, when all of a sudden, I heard a song that perked me up and made me feel like dancing! This was the first time that I heard the original recording of "Cherry, Cherry" and man, was I hooked!! So, after recovering from my illness, I went out and bought "Neil Diamond Classics: The Early Years" as well as "Hot August Night." Those three CDs (Classics and HAN I and II were played constantly. Meanwhile, I started learning more about Neil Diamond, and discovered that he and I had several things in common, including our solitary personas and being melancholy individuals, our religious upbringing (Jewish), and family roots (like Neil, my family was from NYC, lived in the same areas as Neil did, and even went to the same schools). The more I learned about this man, the more I admired him as a human being and not just as a singer/songwriter. I had many ups and downs in my life, and Neil's music was there front and center through much of my formative years, and I can honestly say that his songs got me through some very tough and trying times!

I had taken lessons for various instruments as a child (including piano, guitar, drums, and trumpet) but didn't stick with any of it. In my senior year of high school, I decided to take a music fundamentals/basic theory class, and I started learning to play the keyboard. That really opened my eyes and made me realize how much fun playing music could be, especially learning to play some of my favorite tunes on the keyboard. Around that time, a friend of mine suggested that I try my hand at songwriting. I had always been a great writer in school, including winning awards for creative writing, so I said what the heck, and gave it a try. I started writing lyrics first (they were pretty bad to start with, but I got better) and eventually started composing melodies on the keyboard, and then combined lyrics and music together. I was definitely on to something! I gained confidence in my writing and playing, eventually taught myself to play acoustic rhythm guitar, and was on my way. After several years of writing, doing home demos, and studio demos, I recorded and released my debut CD in December of 2011.

To this day, I still listen to Neil Diamond's music (both the old stuff and new releases), have pretty much every album he has ever released (vinyl, cassette, and CD), have seen him in concert several times, and even have a few noteworthy collectibles (including a couple of very rare items). As I continue my journey as a singer/songwriter and look back on my life so far, I can say with great pride and humility that I have come a LONG way and owe so much to "THE FEEL OF NEIL!!!" ~AR 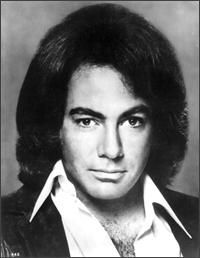